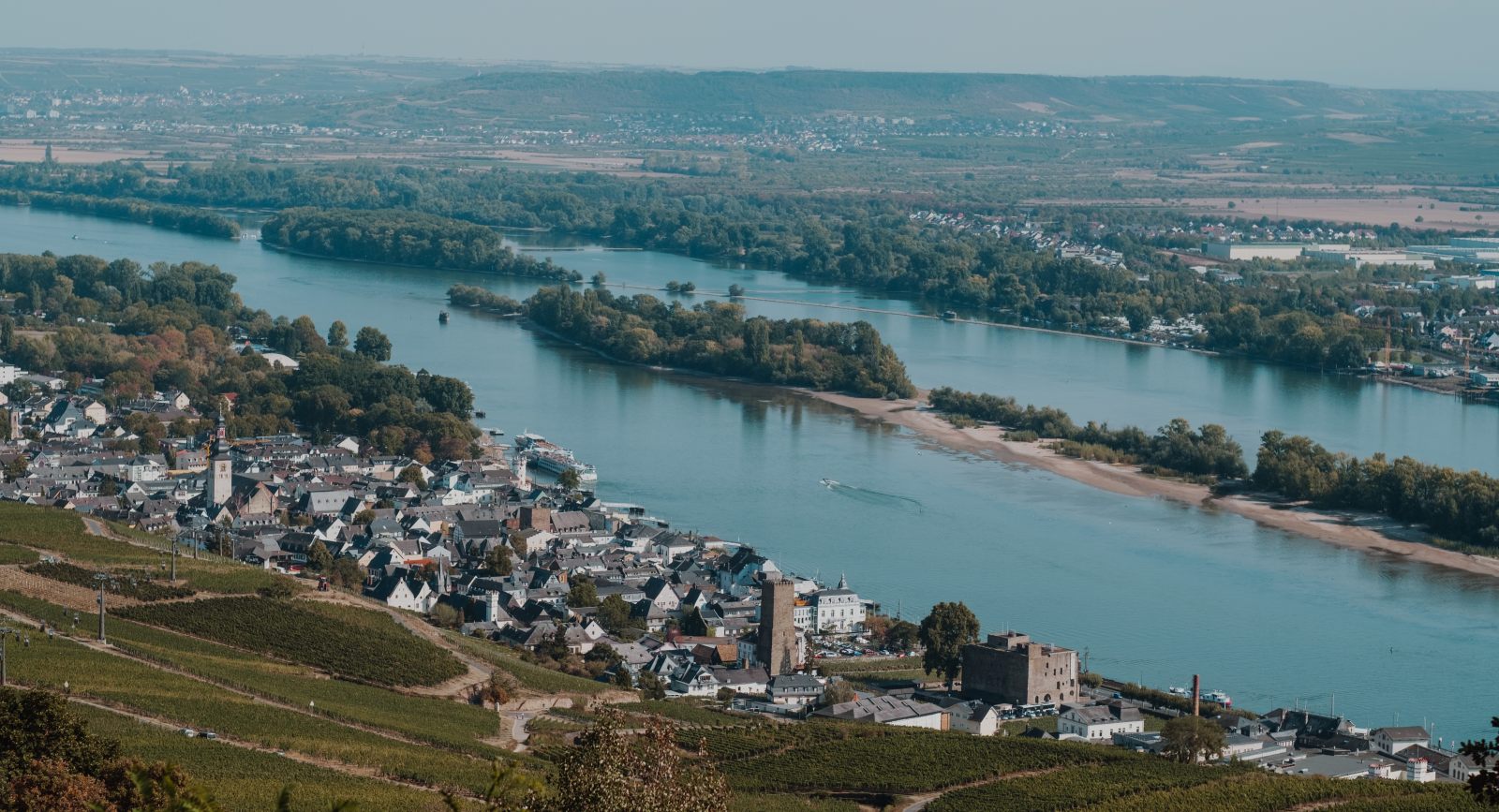 At the end of September, I hopped on a train from my hometown in Switzerland and rode it all the way to Germany, where an epic train trip in great company was awaiting me. I can’t wait to share all the new sights I got to experience with you. But first...

Disclosure: at that point in time, Germany required you to test negatively to COVID less than 48 hours ahead of crossing the border from Switzerland to be able to come in without a quarantine. This trip was made with the support of the German National Tourist Board and the Deutsche Bahn, to highlight that it was safe to travel in Germany, by train, and that you could be creative with your destinations. Once it is encouraged to travel again, please do check what the most recent local travel advice is. This blog post is all about inspiring you, right now, to travel later.

This trip wasn’t about hitting all of the already well-known beautiful touristy spots Germany has to offer and that you’ve most probably already heard of. I really believe that post-pandemic travel will have to more inclusive and about seeing the little hidden gems, connecting with history and the terroir and get to experience the best of each local culture.

Obviously, when you think about finding places off the beaten track, you rarely think of travelling by train, because of... well, access, reliability and spontaneity.

But this absolutely wasn’t a problem in Germany.

Their train and public transport system throughout the whole country is up there with some of the bests I’ve gotten to experience. It was safe, well connected, on time, reliable. And also, is there any better feeling than sitting by a train window and looking at the sceneries slowly changing as your travel progresses?

We travelled with an Interrail Pass valid for a week throughout all of Germany, and armed with the Deutsche Bahn app, we were ready to travel from Frankfurt all the way up North to Hannover, by taking as many detours as necessary to unearth some of the most beautiful unseen gems of the German countryside.

So hop aboard our train to read all about our adventures, here is a list of my favourite hidden gems we got to discover on this trip.

Kloster Eberbach is a former Cistercian Abbey that is renown for being the filming location of Jean-Jacques Annaud’s 1986 Masterpiece „The Name of The Rose“. Our guide, Gunilla, with twinkles in her eyes, recalls seeing Sean Connery walking the grounds of the Abbey. One of the reason the Abbey caught Annaud’s eye for the filming, is that in 900 years, the abbey was never destroyed, and kept most of its original features.  It has now been deconsecrated, and the church hall is often used to host concerts, and it even used to have a road that crossed through it.  The Abbey is also surrounded by many beautiful vineyards, where some world famous Riesling of the Rhein Valley is cultivated.  So obviously, we had to finish off our tour by having a little wine tasting in some of the most beautiful caves I’ve ever seen.

A short train ride along the Rhine away from Eltville, we arrive in the little fairytale town of Rudesheim am Rhein. We walked along the river and vineyards from the train station to the centre of town, where we checked in at the Breuer‘s Rudesheimer Schloss hotel, situated just next to one of the most photogenic and fairytale looking streets I‘ve come across in a long time: the infamous Drosselgasse, the centre of the town, where you‘ll find a lot of shops, pubs, restaurants and... tourists. Turns out Rudesheim is pretty famous all around Germany and it has so much to offer. Walking up from Drosselgasse, take a short turn on the right and you’ll find yourself in front of a sight you’d usually be used to find in ski resorts. In Rudesheim am Rhein, flying over the vineyards in small 2 persons metallic gondolas, is definitely a must. As you hop onto your ride and start climbing up the hill, the whole Rhine valley stretches below you, in all of its glory. The warm sun of September was basking the scenery in a golden hue as the Riesling harvest was just beginning. Just the thought of it makes me giddy. And as you get to the top, you’ll be greeted by a beautiful path that will lead you on a walk with stunning views left and right, from Niederwalddenkmal, a monument built to commemorate the unification of Germany in 1871, to the ruin Rossel with the magnificent views of the river Nahe’s estuary. Wherever you look there’s something that will blow your mind. And after a little walk through the woods, you’ll reach another chairlift station, which will bring you back to the riverside in the village of Assmannshausen, another beautiful place well worth a visit.  For our journey back to Rudesheim, we cruised on a ship on the river, seeing all of the sights from the water. Sun was slowly setting in the distance and the river was reflecting every little glimmer of the sun. For a second you’d forget where you are, closing your eyes, listening to the sound of water and seagulls, your face warmed by the sun. Ahhhhhh. Pure bliss.

I had been to Wetzlar before, and as many of us lovers of the photography world know, it is known as one of the world’s capital of Optik, with brands such as Leica and Zeiss having their headquarters in town. The modern camera as we know it today was invented in that very city by a man named Oskar Barnack. He shot the famous first image on the Ur-Leica at the Eisenmarkt, Iron Market in English, in 1913. More than 100 years later, that iconic photograph can be easily recreated and be like a ticket to step back into time. The city of Wetzlar is a circular walled city that has been built in the Middle-Age around its four market places: The Fish Market, The Corn Market, The Iron Market and the Butter Market. When you walk in the old town you can‘t help but fall in love with its colourful half-timbered houses, tightly woven into one another, in a wonky beautiful ensemble. But what was expecting us in Wetzlar took us on a journey way further back in time.  As it used to be a free imperial city, Wetzlar also became the seat of the Holy Roman Empire’s Imperial Supreme Court in 1689. For this very reason, a young man named Johann Wolfgang von Goethe moved to the city to work as a trainee at the Reichskammergericht in the summer of 1772. During that time, his real life inspired him to write his most famous novel: The Sorrows of Young Werther. On our visit to Wetzlar, we witnessed the scene where Young Werther meets Charlotte for the first time, and fall head over heels for her.

On our third day on the tracks, we left the charming little fairytale towns and discovered a whole other type of architecture. Looking straight out of a Wes Anderson movie set, the Unesco World Heritage site of Zollverein Coal Mine Industrial Complex, where mining activities took place from 1851 until December 23, 1986. The site is ginormous and unsurprisingly, it is also one of the largest coal mines in Europe. Zollverein even earned the very sought after title of “the most beautiful coal mine in the world”.  But beside being an architectural and technical masterpiece, Zollverein is also the anchor point of the European Route of Industrial Culture. It was one of the economical lungs of the Ruhr Valley region, which greatly suffered when the production of coal stopped. Our guide Peter (who kind of looked a little like my dad, he even had the same shoes as him!) told us about all of his ancestors that worked in the mine also, and about the very poor working conditions they were working in, and the premature deaths this caused. The history of Zollverein is a beautifully complex one, but one more than worth a visit. This place can teach us a lot about the future. Following our visit, we hopped on tramways and buses and arrived to Baldeneysee, a little bucolique lake in the Ruhr river. There, we rented some e-bikes and cycled the length of the lake, taking the evening light in. Across the shore from us, found itself the 269 room’s 19th-century mansion, Villa Hügel. Built in a Neoclassical architecture and completed in 1873, it was the very humble home to the industrialist Krupp family from 1873 to 1945. We carried on riding our bikes as the set over the lake, and made our way to Haus am See for dinner, a very cool lounge bar by the river.

And there it came already, our last day on the tracks.  The mission of the day was to visit a very important city within European Peace History: Münster. We were met by our guide in the very place where history was made in 1648, the Hall of Peace of Münster’s City Hall (Rathaus). The room is adorned by beautiful wooden sculptures, on top of which old portraits of European deputies remind you of who was here, all these centuries ago.  It was hard to leave this room, has it had so many meticulously placed details that would have deserved further inspection.  We made our way to the St Paulus Dom, where I fell in love with an astronomical clock I really never wanted to leave. Our day in Munster was far from being over. After a deliciously copious meal at typical Westphalian restaurant, we took a taxi direction Burg Hülshoff, a little castle straight out of a fairytale, with grounds of gardens all around. It also was the birthplace of one the first German woman in literature, Annette von Droste-Hülshoff. We walked all around the gardens for hours, witnessing the Autumn beautifully taking over. The sun was making appearances from behind the clouds, warming us every time it would peak out.

This was a trip where the sights took me on a journey across the sceneries and landscapes of the fairytales I heard in my youth. We witnessed the rolling season from outside the train window, and crossed the rivers running wild, the sun shone all the way through these late days of September. Germany is a place full of wonders that are just begging to be discovered, so when it’s time and safe to do so, I encourage you to go ahead, and go enjoy hidden Germany!